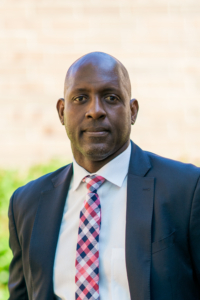 During his 12 year tenure in the NFL he played with the Denver Broncos, Miami Dolphins, and 8 years with the Chicago Bears, retiring as the second leading Tight End in Bears history for catches, yards, and touchdowns behind only Hall of Famer Mike Ditka.

Before entering into the NFL, Desmond set Wake Forest University receiving records and finished his college career as all-time leading receiver in Atlantic Coast Conference history and a degree in communications.

Since retiring from football, Desmond has blazed an impressive path as a financial advisor, inspirational speaker and business coach. In his first year as a full-time advisor with MassMutual Chicago, he finished top 5 in assets accumulated for 2017.

Desmond is now leading his own companies, Desmond Clark Investment Group and The Insurance People. Through his work in the financial arena Desmond is firmly dedicated helping people live better lives by making good financial decisions.

He has appeared on ABC, Fox, CBS, NBC, WGN, ESPN, Comcast News Makers and other network TV and radio stations as a thought leader, author, speaker, philanthropist, entrepreneur, and coach.

Desmond is the author of Before and Beyond the Game and was named 2012 Mentor of the Year by Congressman Danny Davis for his work in the Chicago and Polk County Florida Communities.