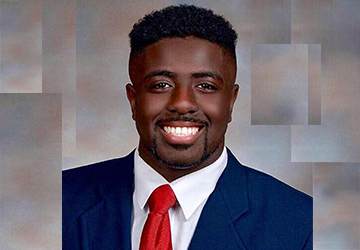 Ebo Entsuah is a proud product of the Lake County education system and State University System of Florida. After graduating East Ridge High School, Entsuah attended Florida State University on an academic scholarship, to later play on the Seminole Football team with National Championship winners in 2014. Armed with a with a zeal for change and a Bachelor’s in International Affairs with a concentration in Political Science, Ebo relocated to Washington, D.C. after graduation and worked for Gubernatorial nominee Ron DeSantis as his legislative aid. With Capitol Hill under his belt, Entsuah is now currently running for City Council Seat #5 in his hometown of Clermont, Florida.

Entsuah’s unique name hails from his West African parents, meaning “boy born on Tuesday.” Though his parents are both from Ghana, Ebo was born in Toronto, Canada and moved to the United States when he was just nine years old. When he’s not working out, Ebo researches policy, reads Stephen King novels, and watches sports.