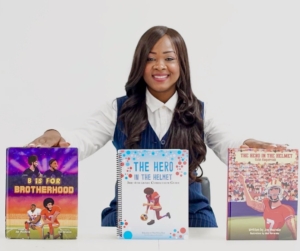 Joa Macnalie was born in Gros-Mourne, Haiti. Her family moved to the United States when she was just five years old. She was born 17 pounds with a host of medical problems and was even pronounced dead after a very bad allergic reaction to a bee sting.  She credits her Grandmother’s prayers and Mom’s strong faith for bringing her back to life.

Joa grew up in a Christian home. Both of her parents were preachers at The Salvation Army, but she does not classify it as a “loving home”. It was very abusive and dysfunctional and her father was the abuser up until her mother divorced him in 2005. They soon moved to Clermont, Florida.

Sports became her outlet to work out her family dysfunctions. She played sports year round to get out of her house as much as possible. Growing up she played basketball, volleyball, softball, and ran track. She notes, “It was how I dreamed my way out.” Joa kept up with Basketball from the time she was nine until she graduated from her undergraduate studies.

She went on to receive a scholarship to play at Southern Vermont College and shined as a scholar-athlete. She was named Most Valuable Player (MVP) three out of the four times she played, named team captain in her freshman year, named the Scott Mckenzie Sportswoman of the year, entered into the 1,000 point club in her junior year, and surpassed the all-time scoring leader becoming the first Black athlete to do so.

Joa graduated with her B.S. in psychology in 2012 becoming the first in her family to do so. She later returned to complete her M.A. degree in professional counseling. Joa is now finishing up her doctoral degree (EdD) at Liberty University and is expected to graduate in 2021.

Joa has worked as a substance abuse counselor, behavioral therapist, and motivational coach for several years at Jewish Home Lifecare and The Salvation Army’s Article 31 mental health program. She became an award-winning and best-selling author in 2018 when she released her first book The Hero in the Helmet. Joa has written two more books since, along with a national curriculum. The names of her other two books are B is for Brotherhood (the sequel to The Hero in the Helmet) and The ABCs of Mental Health Disease, set to be released on August 7, 2020. She owns Macnalie Books LLC and also owns her own styling and consulting company: WhoDressedU?

Currently, as a young woman under 30, Joa is running for Clermont City Council seat 1. Joa also has 15 loving nieces and nephews that she says “are my pride and joy.”