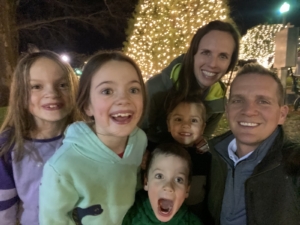 Job Title: Chick-fil-A Operator / Memphis, TN
Their Podcast: How to Cultivate Leaders Instead of Followers

John grew up in Jacksonville, Florida with a twin brother and younger sister. He describes his parents as hard working blue collar people. His father is a plumber and his mother loves animals.  When he was growing up, John would have to clean up after them as punishment.  He credits this as the reason he’s not fond of pets as an adult.  He also spend many summers working with his father in the attic during repipes.  After floundering around for a couple years post high school, John met his girlfriend (now wife), Marybeth.  It was she who convinced him to work for Chick-fil-A. She claimed to work for the best operator there was. He reluctantly went to work for Rocky in the summer of 2001, thinking it would be a summer job. John loved working there so much, he stayed around for 5 years.

Rocky helped him grow as a leader and showed him a new way to work. He became an operator for Chick-fil-A in may of 2009 in Memphis, Tennessee.  He and his wife have 5 “ish” kids.  After trying to have kids on their own for 5 years and giving birth to embryo babies: Madalynn, Mckinnly, and Jude, their family continued to grow.  Shortly after they got quite a surprise. Thus, Titus was born 15 months after Jude. The next year Sarahi came to live with their family at the age of 15. She has two loving parents who live in Mexico and wanted her to go to school in the states. Marybeth homeschools their 4 younger kids and in the words of John, she “is the absolute best teacher, mother, spouse, human in the entire world! I may be her only poor choice in life.” For fun, they love spending time outdoors exploring or going to the lake.