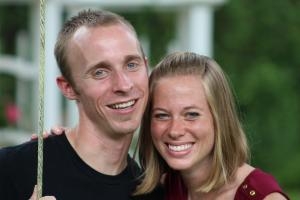 Kim Patton lives with her husband Kevin surrounded by sunshine in Central Florida. They house many animals: two bunnies and a turtle currently, but sometimes up to 10 animals at one time (mostly fish, baby bunnies and baby turtles).

Growing up with six brothers gave Kim an insatiable love for sports and the outdoors. She dreamed about scoring touchdowns and wishes she could run a marathon someday. She runs on the trail, biking on her red skinny-wheeled road bike and plays ultimate frisbee or tennis.

Her husband, Kevin, is her best friend, married since 2010. Their favorite thing to do together is serve at our church. Together they run the local youth group: the games, the events, and the trips. Kim affectionally says that he is her favorite teacher of the Bible and of life, and she learns her patience and kindness from him. They’re lovers of TV and movies that they aren’t ashamed to re-watch often.

During the day, Kim teaches Spanish and tutors English as a second language. She believes it’s a privilege to watch young kids, middle-aged students and retirees fall in the love with the magic of a second language.

Over the past few years, Kim has used her writing as a tool to share her story of unexplained infertility with members of her community. She writes to help those who read her works feel a little less alone. Kim is author to multiple works such as A Cub Among Bears, How God Opened My Heart to Adoption, and A Project That Needs Tweaking.

On February 21, 2020, Kim and her husband became the proud adoptive parents of Eden Renee Patton.