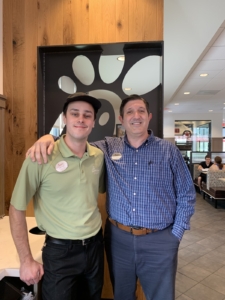 Job Title: Interim Manager/ Grand Opening Supervisor at Chick-fil-A
Their Podcast: How to Cultivate Leaders Instead of Followers

Kyle was born in St. Petersburg, Florida and soon moved to Clermont, Florida before he was even a year old.  His father was a military background and was an absolute renaissance man, while his mother retired from her career to raise he and his brother, showing true commitment and care.  He grew up battling Tourettes syndrome, which threw numerous obstacles at him all throughout his adolescence.  Still, he was always active and involved with many sports, including Skateboarding and Basketball.

Kyle later graduated from UCF’s Rosen College of Hospitality (2nd in the world for hospitality) with a Bachelors in Hospitality Management.  Here he was able to learn from great industry leaders from all over the world. Although Chick-fil-A has been his only job, he has experienced a lot within his 8 year tenure. He’s been able to open an astonishing 21 Chick-fil-A locations, including high profile stores like the first locations in New York City, Las Vegas, Portland, upstate New York, and even a food truck in Hawaii which was the first contact Chick-fil-A has had in Hawaii.

Kyle is currently serving in a home office role as an Interim Manager, who steps into the place of an owner for incorporated locations. He is currently running a mall location in the heartland of Texas (Brownwood).  This is the 27th location he has worked at with Chick-fil-A!  After fulfilling his 2 year commitment for Chick-fil-A inc. as an Interim Manager and GOS, Kyle will be taking his talents to the NorthWestern United States to settle down as an operator of his own location in the Portland or Seattle area. Kyle is newly married to his lovely wife, Samantha, as of January 30th, 2020. They are accompanied by their two dogs Lila (toy poodle) and Noodle (golden doodle).