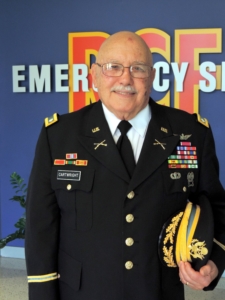 Their Podcast: Al Cartwright: Leadership Principles from the Army

Al Cartwright served in the army for 20 years. He entered the army as an enlisted man, becoming a paratrooper until he attended Officer Candidate School and received a commission as a 2nd Lieutenant. Rising through the rank of Lieutenant Colonel, he became an infantry officer, army aviator, and he was qualified in both fixed wing aircraft and helicopters.

Over the years, Cartwright accumulated over 6,000 hours of flight time. Accolades include many awards and badges, not limited to: The Legion of Merit, Distinguished Flying Cross, Bronze Star, Eleven Air Medals, Meritase Service Medal, Vietnamese Cross of Gallantry, six service ribbons, and two campaign ribbons for Vietnam. In addition to these individual decorations, Cartwright served as the commander of eight helicopter gunships and supported Project Delta, a special forces unit in Vietnam that was awarded the Presidential Unit Citation, the Valorous Unit Award, the Meritorious Unit Award, the Vietnamese Cross of Gallantry, and the only project to receive the Navy Unit Commendation Award. Al also earned the parachute badge and senior Aviator wings while serving.